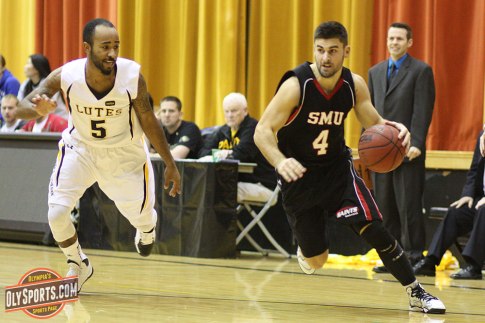 Evan Coulter, Isaac Bianchini and Tyler Copp each set career highs scoring 23, 15 and 14 points respectively and Saint Martin’s came back from down as many as 17 points to tie the game in the second half but weren’t able to get over the hump in the closing minutes and fell 83-77 to Central Washington in Ellensburg.

Mark McLaughlin scored 27 points and Kevin Davis racked up a double-double with 13 points and 13 boards.

Despite a six game winning streak, Saint Martin’s changed their starting lineup and struggled mightily in Fairbanks dropping their first GNAC game, 78-64, to Alaska. A 26-6 run in the first half sealed the deal early and the Nanooks led by as many as 27 in the second half.

Angela Gelhar scored 18 points – 10 from the free throw line for the Saints while Jordan Wilson did most of the damage for Alaska scoring 21 points with 14 rebounds.