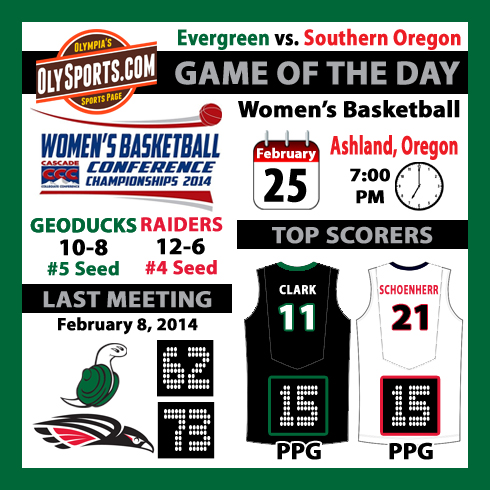 The Evergreen women’s basketball team travels to Ashland, Oregon to take on Southern Oregon tonight at 7:00 PM in the first round of the Cascade Conference Tournament.

The Geoducks went 10-8 in CCC play this season and earned the fifth seed matching their best conference finish from 2004-2005. They have never won a playoff game in sixth previous tries, all under outgoing head coach Monica Heuer. Four Geoducks average in double-figures scoring this season: Sammi Clark (14.7), Brittany Gray (13.8), Jessica Denmon (11.2) and Sadee Jones (10.8). Gray is also fourth in the CCC with 8.8 rebounds per game.

Southern Oregon went 12-6 in conference play and is led by Rainier High School grad Kristin Schoenherr with 15.1 points per game. Elma’s Carly Meister averages 14.5 points and 7.9 rebounds per game. The Raiders are first in scoring at 85.2 points and went 23-7 overall.

The two teams met twice in the regular season and Southern Oregon took both meetings, 86-72 on January 10th in Olympia and 73-62 on February 8th in Ashland.

You can watch the game live by paying $7.95 or follow along live stats for free by clicking here.

Posted on February 25, 2014, in Basketball, College, The Evergreen State College. Bookmark the permalink. Leave a comment.