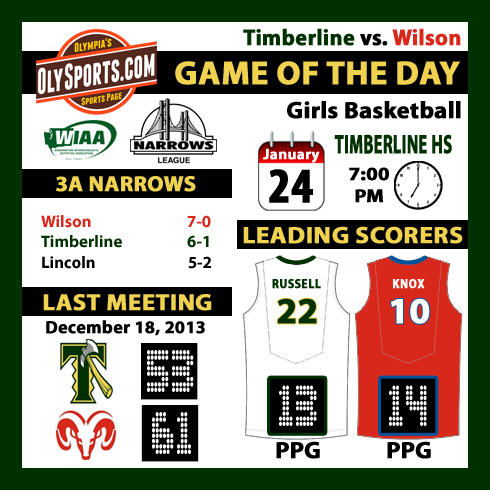 A battle for first place hits Timberline High School tonight when the 5-2 Blazers host 6-1 Wilson at 7:00 PM. The two teams met on December 18th in the 3A Narrows opener and freshman Josie Matz scored 17 points for the Rams in a 61-53 win. Callan Russell scored a game high 20 points in the loss for the Blazers.

Timberline is 8-6 overall this season and is riding a three game winning streak after dropping a pair of non-conference games to Central Kitsap and Black Hills. Wilson is 12-3 this season and are ranked #8 in 3A in the latest Scoreczar rankings.

Tumwater hosts WF West tonight in a rematch of an instant classic from December 21st. Josiah Warner scored 31 points including a pair of buzzer beating 3-pointers that kept the T-Birds alive in a triple-overtime 81-78 loss in Chehalis.

The Evergreen women and reigning Cascade Conference Player of the Week Brittany Gray host Northwest Christian in game one of a Geoducks doubleheader at the CRC Gymnasium. Evergreen sits at 4-5 in the CCC after a weekend sweep in Portland and are in seventh place a game behind Southern Oregon and Northwest. The Beacons and Geoducks met on December 21st in Eugene and Sadee Jones scored 14 points in a 70-43 romp.

In game two, former University of Oregon star and former ex-NBA player Luke Jackson brings his Northwest Christian team to town in fifth place in the CCC at 5-4. Meanwhile, the Geoducks are looking for their second win of the conference season after they were swept in Portland last weekend.