← Schedule for Friday, April 25th, With Any Luck
Friday Scores: T-Birds Beat the Rain and the Cougars →

The inaugural season of the EPLWA kicks off this weekend and Oly Sports will keep an eye on the league and the closest team to town, South Sound FC, with great interest and with an eye on a future here in Olympia.

The Shock will play their home games just a couple of I-5 exits away at Harry Lang Stadium in Lakewood and feature a couple of Olympia area players including Evergreen alum Maurico Sanchez in goal. The Shock travel to Silverdale to take on WestSound FC on Sunday at 4:00 PM to open their season.

Here is a look at the three games and six teams from around the state debuting this weekend from GoalWA.net… 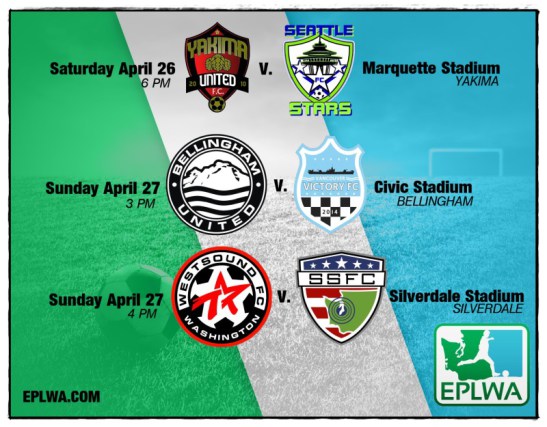 The Evergreen Premier League (EPLWA) kicks off its inaugural season this weekend with matches in Yakima, Bellingham and Silverdale. The elite men’s soccer league was formed in the summer of 2013. Less than a year later hundreds of soccer folks from around Washington have organized eight clubs and a new league to showcase local talent and give supporters in towns across the state a home club to cheer for.

EPLWA.com has a club-by-club look at recent news here.

Yakima United FC has the privilege of hosting the first-ever EPLWA match this Saturday at 6 PM against Seattle Stars FC at Marquette Stadium. It’s a new era for soccer in the Yakima Valley, as well as a new start for United. The…

← Schedule for Friday, April 25th, With Any Luck
Friday Scores: T-Birds Beat the Rain and the Cougars →