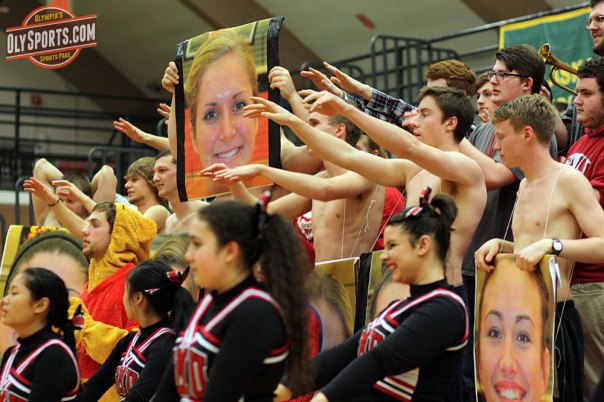 Angela Gelhar hit back-to-back three pointers at the 1:57 and 1:16 marks of the second half and Saint Martin’s held Alaska Anchorage scoreless over the last 2 1/2 minutes and pulled the GNAC Championships first round upset, 58-48, in front of a rowdy home court crowd at Marcus Pavilion. Gelhar continued to feast on Seawolves this season posting 21 points tonight after scoring 36 and 12 in their two regular season meetings.

The #3 seed Alaska Anchorage jumped out to a 16-9 lead in the first half but the #6 seed Saints held the Seawolves scoreless for the next eight minutes. A pair of Brooke Paulson free throws capped off a 15 point run to give the Saints a 24-16 lead with 3:41 left to play and took a ten point lead into the half, 33-23.

The Saints kept UAA at arms length and never allowed them to get within five points until an Alli Madison layup with four minutes left cut the lead to three. On the next Saints possession, Chelsea Haskey missed a layup and then fouled out with 2:38 left. Kiki Robertson hit one of her two free throws on the Haskey foul and the Seawolves found themselves down by just two, 50-48. But it was the last point that the Seawolves would score and Gelhar drained her two threes on the next two Saints possessions and Megan Wiedeman sank two free throws to seal the deal.

Wiedeman scored eight points and pulled down a whopping 17 rebounds in the win while Jordyn Richardson chipped in 10 points including a three pointer that gave the Saints an 11 point lead at the 10:18 mark of the second half. Haskey pulled in eleven boards and racked up a pair of blocks and eight points before she was disqualified.

With their third win over Alaska Anchorage this season, the Saints moved to 18-10 overall and secured a date with #2 seed Western Washington on Friday night at 5:15 PM.