Today (2/28): Blazers in Bellevue for Regionals Clash with Crusaders 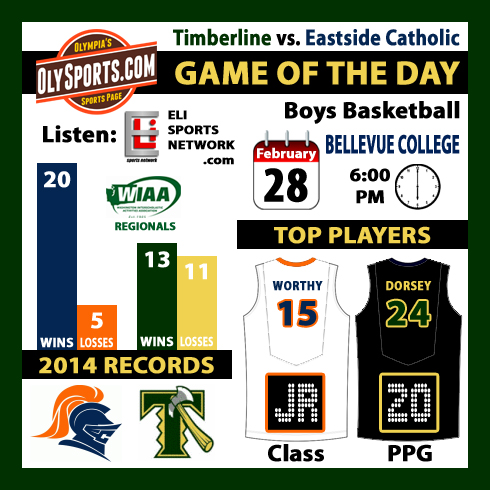 The Blazers have lost two straight games and three of their last five games but earned a spot in regionals with wins over Peninsula and Enumclaw in the first and second round of the district tournament. They then fell to Lincoln in the semifinals and Foss in the 3rd/4th place game.

Timberline is 13-11 overall this season and is led by Washington signee Donaven Dorsey (20 points, 10 rebounds per game) and usually get a big contribution from one of their other starters, lately that has been either Brandell Evans or Jarryn Bush.

Eastside Catholic finished in second place of the 3A Metro, behind just nationally ranked powerhouse Rainier Beach. Three of the Crusaders five losses came to Rainier Beach. Twice they were blown out but fell by just three on the Vikings’ home court. Their other two losses came to O’Dea and Chaminade of California.

They are led by Mandrell Worthy, a 6-3 junior that missed the last game against Rainier Beach with an ankle injury. The Blazers will also have to deal with twin seniors Ian and and Nathan Cristie if they want to make a repeat visit to the Tacoma Dome.

The game can be heard live on the Eli Sports Network beginning at 5:50 PM.