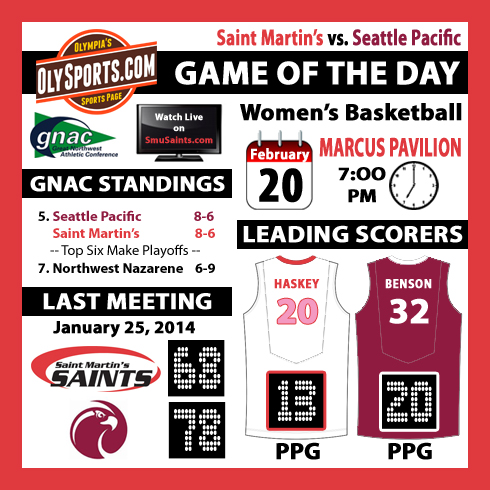 Important GNAC battle tonight at Marcus Pavilion when Saint Martin’s hosts Seattle Pacific at 7:00 PM. The two teams are tied for fifth place in the conference standings with the top six teams making the conference tournament.

The Saints sit 2 1/2 games ahead seventh place Northwest Nazarene and need a pair of wins in the last two games to clinch a playoff spot. They finish the season against NNU in Nampa next Saturday. The Saints could take over sole possession of fifth place with a win and could move into fourth place if Alaska Anchorage loses to Simon Fraser tonight.

The Saints have been terrific at Marcus Pavilion. They are 9-1 and have given up just 54 points per game on their home court.

Krista Stabler scored 21 points in their first meeting in Seattle and the Saints met a 14 point lead in the first half before the Falcons stormed back shooting 68% in the second half to take a 78-68 win.

It’s an all 2A EvCo Distirct IV consolation bracket semifinal tonight at WF West when Capital takes on Tumwater at 6:00 PM and River Ridge faces Centralia in the second game of a loser-out doubleheader.

Capital upset Centralia in the opening round of districts but fell to Hockinson on Tuesday night while Tumwater lost to Mark Morris in the first round and survived against RA Long two nights ago. The T-Birds took the first meeting between the two teams on December 17th, 69-55, but the Cougars captured a 55-49 win on January 21st. Tumwater finished in fourth in the 2A EvCo at 6-6 while Capital was a game behind them at 5-7.

One of the two top teams in the 2A EvCo will see their season end tonight when River Ridge faces Centralia. Centralia won the regular season at 10-2 but lost to Capital in the opening round before blowing out rival WF West on Tuesday to continue their season. River Ridge beat RA Long in the first round but the other Longview school, Mark Morris, did them in on Tuesday. The Tigers and Hawks split the season series.