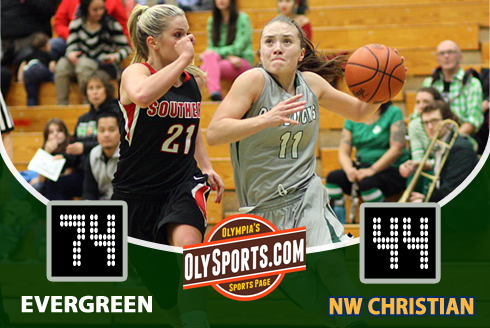 Evergreen jumped out to a 9-2 lead in the first five minutes and never let up in their 74-44 win over Northwest Christian at the CRC Gymnasium. The Geoducks extended their lead too 20 points at the end of the first half and led by as many as a 33 points en route to their third straight Cascade Conference win.

Sammi Clark scored 13 points and dished out nine assists to lead Evergreen and Jessica Denmon notched a double-double with 10 points and 11 rebounds. Uriah Thomas came off the bench to chip in 10 to help the Geoducks improve to 5-5 in league play and 9-8 overall.

Evergreen roared back from a 13 point deficit early in the second half and was within three points after a layup by Dre Taylor cut the Northwest Christian lead to 74-71 with 21 seconds left, but the Beacons went perfect from the line over the next two possessions and escaped Olympia with a 78-73 win.

Frankie Johnson led the Geoducks with 20 points including four 3-pointers. Marc and Dre Taylor each scored in double digits with 17 and 16 point respectively. Evergreen went 0-for-11 from three point range in the second half before burying eight shots from behind the arc in their comeback over the final 20 minutes.

Posted on January 25, 2014, in Basketball, College, The Evergreen State College. Bookmark the permalink. Leave a comment.