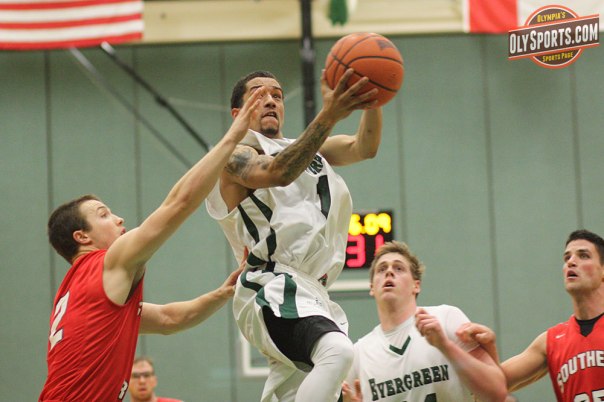 A night after nearly knocking off the #6 team in the nation, Evergreen played their best game of the season and notched their first Cascade Conference win and snapped a 12 game losing streak with a 90-87 victory over Oregon Tech at the CRC Gymnasium. Marc Taylor’s jumper with 3:54 left broke a 76-76 tie and put the Geoducks up for good.

Dre Taylor dropped 20 points on the Hustlin’ Owls and Frankie Johnson added 19 points with eight assists in the win. Taylor finished with a double-double with 13 points and 12 rebounds  and Kyle Calhoun chipped in 16 points as the starting lineup scored 76 of the Geoducks’ 90 points.

OIT head coach Danny Miles was going for his 999th career win but will have to wait for at least two weeks before he can collect win #1000.

Saint Martin’s shot 50% in the first half including 11 three-pointers and built a 14 point lead at the half. But the second half belonged to Northwest Nazarene as they shot 63% with eight three-pointers and took an 80-76 win on their home court in Nampa.

Ryan Rogers scored 22 points for the Saints and Isaac Bianchini set a new career high for the second game in a row with 18 points, 15 of those in the first half. Evan Coulter and Riley Carel each chipped in 13 points.

Slanblaytee Kaye and and Brian Tyson combined to score 42 of SPSCC’s 51 points in their 63-51 loss to Tacoma Community College in Tacoma. Kaye scored a game high 27 points with seven rebounds and Tyson chipped in 15 points and nine boards. The Clippers scored just 15 points in the first half on 21% shooting.

Angela Gelhar went off for 36 points including six of Saint Martin’s 10 three-pointers to lead the Saints to an 85-78 bounce back win at Alaska-Anchorage. Gelhar’s 36 points were the most by a Saint since 2010 and it was their first win in Anchorage since 2006. With the win, SMU moved to 4-1 in the GNAC and took back first place from the Seawolves, who fell to 4-2.

Ciara Pedroni, Jordyn Richardson and Chelsea Haskey each scored in double-digits with 12, 11 and 10 points respectively for the Saints. Jori Skorpik, starting her second game in a row, dished out seven assists.

Oregon Tech’s Karly Leveque hit a jumper with two seconds left in the second half to tie the game at 70, McKensey Peters made 1-of-2 free throws with 29 seconds left in the first overtime to send it to a second OT but Evergreen ran out of steam in double overtime and dropped a 93-80 decision to the Hustlin’ Owls at the CRC Gymnasium.

Sammi Clark scored 24 points for the Geoducks and Brittany Gray racked up 19 points and a game high 13 rebounds in the loss. Evergreen fell to 2-5 in the CCC while 20th ranked OIT moved to 5-3 in conference and 17-3 overall.

SPSCC and Tacoma each hit 21 field goals including three 3-pointers but the Clippers committed 23 personal fouls and the Titans hit nine more free throws accounting for the nine point difference in the final, a 67-58 TCC win.  LaKeisha Anger notched a double-double with 15 points and 12 rebounds and Maria Jesse added 11 points in the loss.