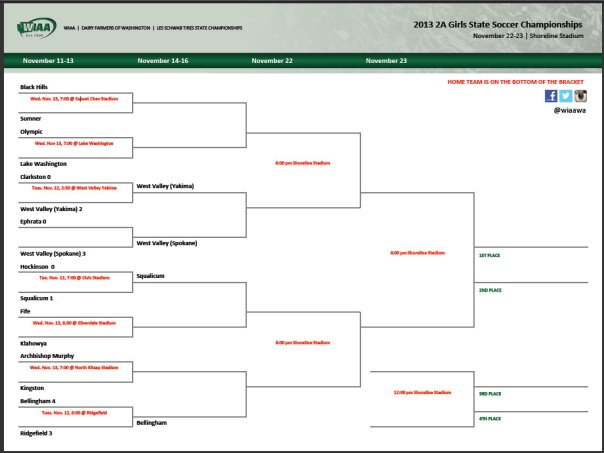 It’s a first round battle that kind of looks like a state title game when Black Hills travels to Sumner for a 7:00 PM first kick at Sunset Chev Stadium.

Both teams are coming off of district championship game losses and are the #2 seeds out of District 4 and District 3. Sumner lost 1-0 to Fife and Black Hills fell to Ridgefield 1-0 on Halloween. It was only the second loss of the season for both teams. Sumner has outscored their opponents 94-5 this year while Black Hills has a 76-15 edge in their 19 games.

The game can be heard live on the Eli Sports Network beginning at 6:45 PM.

The Evergreen women will look to bounce back from two losses to Saint Martin’s and Northwest last week when they host Montana Tech tonight at the CRC. The Orediggers are 2-1 this season after they beat College of Idaho and lost to defending NAIA national champion Westmont 59-48 in Salt Lake City.

Tumwater senior Justin Graham was surprised by an assembly and ESPN camera crews on Tuesday morning when he was named a finalist for the High School Heisman Trophy. Graham plays basketball, baseball, has a 4.0 GPA and gives his time in many ways to the community. Read more from Meg Wochnick and The Olympian here.

I don’t cover high school cross country or other individual sports regularly. It’s a decision that had to be made based on time and information considerations. But, I’d be remiss if I didn’t at least mention that the Northwest Christian girls cross country team won their eighth straight 2B state championship this week. Ben Zimmerman, freelancing for the The Olympian, has the story.