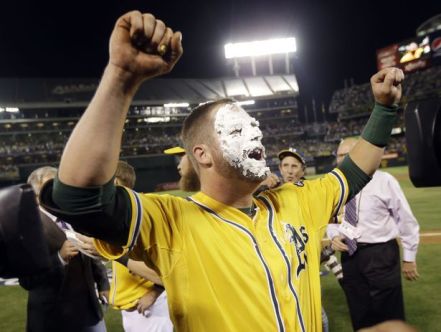 Stephen Vogt drove in the game winning run in the bottom of the ninth inning on Saturday night to give the Oakland A’s a 1-0 win over the Detroit Tigers in game two of the American League Division Series. The Visalia, California native that resides in the Olympia area in the off-season singled off of Tigers reliever Rick Porcello to drive in Yoenis Cespedes.

When one of you baseball coaches gets the game winning hit in the bottom of the ninth in game two ALDS! Ata baby steven!#clutch#hometownhero

Shout out to @SVogt1229 on the game winner tonight!!! Pretty cool that I know him!

Way to go Steve Vogt! Not only am I an A's fan, his wife was once an assistant BB coach at a college where I was the AD! Oh, & SONNY GRAY

Read a recap of the game and see more pictures of Vogt’s game winner here and this story on Vogt from ESPN’s Jim Caple here.

Posted on October 6, 2013, in Baseball, Uncategorized. Bookmark the permalink. 1 Comment.