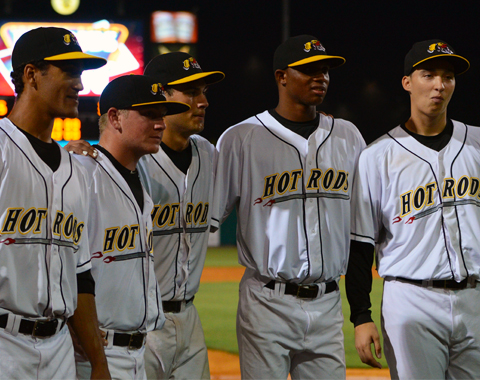 While usually a manager just has to keep an eye on the pitch count and keep quiet during a no-hitter, Sandberg had to use four pitchers after his starter, Blake Snell, walked five batters and gave up one run in the third inning after a walk and two errors. Eduar Quinonez, Nick Sawyer and Marcus Jensen combined to pitch the final six innings with just two walks the rest of the way. Left fielder Marty Ganntt made the play of the game in the ninth inning robbing Dalton Pompey of a base hit with a leaping catch.

“It is great to be part of history,” Sandberg told Michael Compton of the Bowling Green Daily News. “No-hitters are difficult, especially when you get a bunch of pitchers involved. In the ninth inning, when Gantt made the play, everybody jumped off their seats. You could see over the course of the game that the guys were sitting in the same spot, had the same tendencies, the superstitions. You started to feel it around the sixth inning – the nervous energy.”

Sandberg, the former third baseman for the Tampa Bay Devil Rays who is in his first year with the Rays’ full season Single-A affiliate in Bowling Green, recently picked up his 200th career managerial win and won the New York-Penn League championship with the Hudson Valley Renegades last season. The Hot Rods are 40-30 under his guidance this year.

Posted on June 21, 2013, in Alumni, Baseball. Bookmark the permalink. Leave a comment.