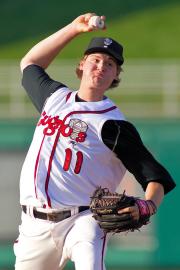 Olympia High School alum Kramer Champlin made his first start of the season on Saturday night for the single-A Lansing Lugnuts in a seven inning game two of a doubleheader against the West Michigan Whitecaps in Comstock Park, Michigan.

Champlin, a 6-foot-6 right-hander who was drafted by the Toronto Blue Jays in the 33rd round of the 2011 draft out of Arizona State, had retired all 18 batters that he faced through six innings and entered the final inning of the game with a 2-0 lead and a perfect game on the line.

He made quick work of the Whitecaps’ Zach Kirksey, who lined out to left field on the first pitch and then struck out Jered Reaves for the second out of the inning. With just one out to go to perfection, Devon Travis hit a tough chopper that ate up shortstop Emilio Guerrero on a short hop, went under his glove and bounced into left field.

So, with the perfect game off the table but a no-hitter still a possibility, you make the call, is this a hit or an error? Watch the video by clicking here.

It’s a tough call, but the the official scorer gave Travis a base hit, ending Champlin’s bid for a no-hitter. Lugnuts play-by-play announcer, Jesse Goldberg-Strasser, described Lansing players throwing up their hands in disgust and looking up to the press box following the play, obviously rooting for that to go down as an error.

Champlin promptly struck out the next batter, his tenth strikeout of the game, to secure the complete game, one hit shutout in his seventh career start. He moved to 3-1 on the season and lowered his ERA by nearly a point from 4.01 before the game to 3.13.

His performance comes one day after another Olympia High School star pitched his best game of the season. Adam Conley, a second round pick of the Miami Marlins in the 2011 draft out of Washington State, struck out eight and gave up just one earned run on seven hits for the double-A Jacksonville Suns. He moved to 5-2 in 12 starts this season and lowered his ERA to 4.10.