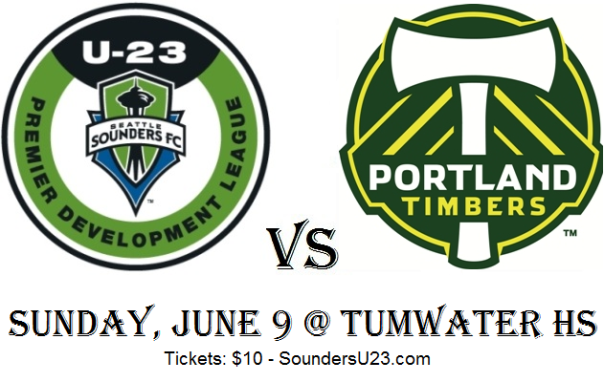 On Sunday afternoon, the junior version of the Cascadia Cup returns to the South Sound for a second year when the Sounders U-23s and Portland Timbers U-23s meet at Tumwater Stadium at 2:00 PM. Last season, Jamael Cox scored the game’s only goal in stoppage time to give the Sounders U-23s a 1-0 win in front of a crowd of nearly 1,400.

Today we take a look at the Timbers U-23s squad that will travel the 100 miles up to Tumwater to take part in one of Oly Sports’ favorite sporting events of the year.

The Timbers U-23s come into Sunday’s game in first place of the Premier Development League’s Northwest Division with 13 points at 4-1-1. The Timbers were undefeated through five games until they fell to Washington Crossfire 1-0 on Wednesday night at Redmond High School.

The Timbers U-23s have allowed just two goals this PDL season, the only other one coming to North Sound on May 18th. Goalkeeper David Meves has four shutouts in six games. The University of Akron alum posted a career goals against average of an astounding 0.50 and finished his four year career for the Zips as the NCAA’s all-time leader in shutouts with 54 including a 1-0 shutout in the 2010 NCAA College Cup championship game.

Clark Phillips leads the Timbers with three goals. The junior forward from Gonzaga is in his second season with the club having scored four goals for them in 2012. Phillips started all 19 games for the Zags and scored five goals with two assists. Phillips teams with the University of Memphis’ Mark Sherrod in the front. Sherrod has a pair of assists for the Timbers and scored 12 goals with four assists in his junior season at Memphis.

Creighton junior Eric Miller has scored two goals and an assist for the Timbers after starting all 19 games for the Bluejays including a College Cup semifinal loss to eventual national champion Indiana. However, Miller might not be with the club in Tumwater. He just wrapped up a stint with the US U-20 National Team at the Toulon Tournament in Toulon, France.

The Timbers U-23s and Sounders U-23s have met once already this season, a 2-0 season opening Timbers win on May 16th at Jeld-Wen Field in front of a Thursday afternoon crowd of 3,681. Miller opened the scoring in the 25th minute and Zack Foxhoven, a senior at Louisville, scored in the 65th minute.

Last season, the Timbers finished second to the Sounders U-23s in the Northwest Division and earned a trip to the Western Conference Championships with a 2-1 win over the Kitsap Pumas and current Sounders U-23s goalkeeper Zac Lubin. The Timbers fell to the Ventura County Fusion, 1-0, in Ventura, California to end their season.

The Timbers qualified for the US Open Cup and knocked off the NPSL’s Sacramento Gold, 3-2, at Jeld-Wen Field on May 14th before falling to the USL Pro’s Charleston Battery, 1-0, in Portland on May 21st.

Jim Rilatt is in his fifth season as the head coach of the Timbers. He led them to a 20-0-0 season and a PDL championship in 2010.

Images courtesy of  Gonzaga and Creighton athletic departments and the Sounders U-23s.