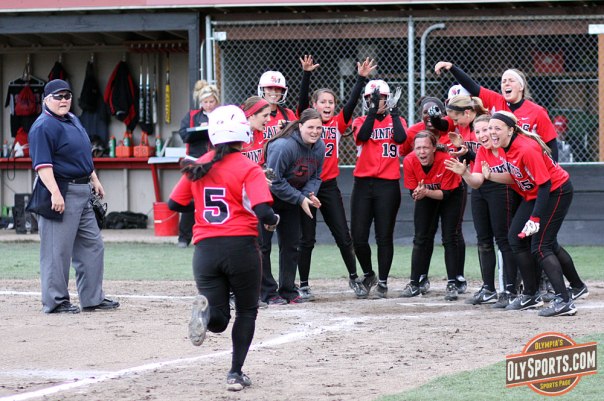 The #17 ranked Saint Martin’s softball team travels to Arcata, California to take on Grand Canyon in the first game of the NCAA Division II tournament on Friday. The Saints are the #5 seed in the Western Regional and will face the #4 seed ‘Lopes at 1:30 PM. Joining them in the double-elimination sub-regional are the #8 seed UC San Diego and the #1 seed and host Humboldt State.

Video and live stats for the games are available from the Humboldt State athletics website by clicking here.

Grand Canyon – The ‘Lopes come into their final Division II softball tournament (they will be transitioning to Division I after this season) at 39-17 overall, finishing fourth in the PacWest. They were ranked #17 in the nation before dropping out in the last poll after losing three of the last four games to Dixie State.

The ‘Lopes have a potent one-two punch in the circle with juniors Stephanie Pesquiera and Kiki Sepulveda. Pesquiera went 20-10 with a 1.74 ERA and 121 strikeouts this season as their #1 starter while Sepulveda went 13-4 with a 1.69 ERA. Junior outfielder Claire Zampini and sophomore shortstop Kelsey Barak led them offensively. Zampini hit .441 with 32 RBIs and Barak led the team with six home runs and 15 doubles and finished second with 41 RBIs. Kayla Henry is a speedy outfielder who stole 29 bases with nine triples and a .426 batting average.

Grand Canyon and the Saints participated in the Tournament of Champions in Turlock, California but did not meet. The ‘Lopes played two GNAC teams during the regular season beating Simon Fraser 7-1 on February 9th in Las Vegas and took a 5-0 win over Northwest Nazarene at the Touranment of Champions.

Humboldt State – The Lumberjacks are the #5 ranked team in the nation at 47-12 overall this season and were winners of the CCAA regular season and tourament.

Humboldt State is led by junior first baseman Chrissy Stalf, who hit .411 this season and leads the nation with 26 homeruns. The Lumberjacks as a team hit 103 homeruns this season. Sophomore Hannah Williams hit 16 bombs and drove in a team high 56 runs and senior Courtney Hiatt hit 14 homers with 47 RBIs. Freshman Katie Obbema went 26-3 with a 2.10 ERA as their #1 pitcher.

Saint Martin’s made a statement at the Tournament of Champions with a 5-4 win over the Lumberjacks. Errors killed Humbolt State in that game with three of the five Saint Martin’s runs coming after errors including the game winning run in the seventh inning. Sam Munger and Dani wall each had two hits for the Saints and Wall drove in three runs while Stalf and Williams homered for the ‘Jacks.

UC San Diego – The Tritons finished second in the CCAA to Humboldt State at 24-12 in conference play and 33-23 overall. Five of those losses came to their first round opponent, Humboldt State, including a loss in the CCAA tournament championship game.

Nothing much jumps out at you about the Tritons as a team. Senior Nicole Spangler and junior Caitlin Brown lead their offense. Spangler hit .347 with 13 doubles and 26 RBIs while Brown hit led the team with nine home runs and 40 RBIs. Four different pitchers made 20+ appearances for the Tritons. Junior Jennifer Manuel went 11-3 with a 2.37 ERA.

The Tritons also took part in the Tournament of Champions but didn’t face the Saints. UCSD faced one GNAC team this season taking three games of four against Western Oregon early in the season at home.

Posted on May 9, 2013, in College, Saint Martin's University, Softball. Bookmark the permalink. 1 Comment.