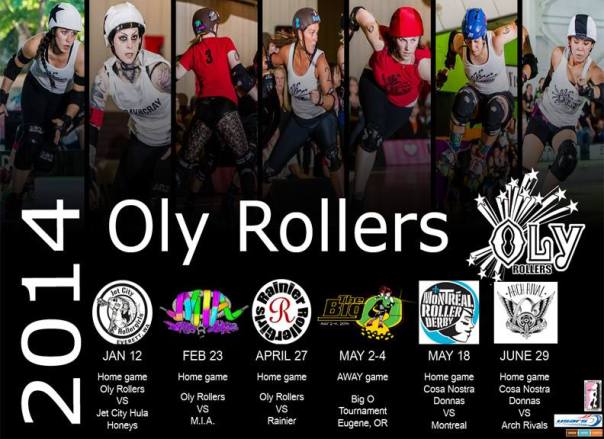 The Oly Rollers have posted their 2014 season, highlighted by home bouts against the travel teams from Montreal Roller Derby and St. Louis’ Arch Rivals. They will also travel to the Big O tournament in Eugene, Oregon where they will have the chance to face highly ranked WFTDA teams Rose City, Texas, Philly and Kansas City.

Oly will open their season against the Jet City Hula Honeys on January 18th at Skateland! and will follow that up with a February date with fellow Olympia area MIA Derby. And in April they will face Seattle’s Rainier Roller Girls. According to their website, they also expect to announce more bouts soon.

All of the currently schedule bouts are listed as using the WFTDA rule set and you can expect to see the Cosa Nostra Donnas, the varsity team of the Oly Rollers, qualify for the WFTDA playoffs after not playing enough WFTDA bouts to qualify last season. Oly focused on the USARS rule set last season and were never tested, easily rolling to their second straight USARS national championship. 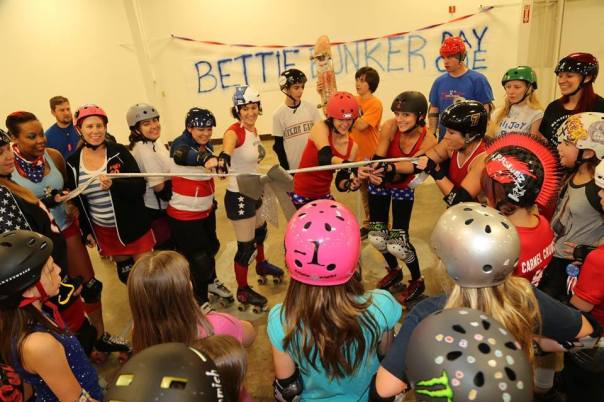 In other derby news, the JBLM Bettie Brigade and their youth league, the JBLM Bettie Bratz, announced last week that they have moved from their home on the base to a warehouse that they are leasing at 5700 Lacey Boulevard. The warehouse is located on the corner of Lacey Boulevard and Clearbrook Drive and is near Meconi’s, Cheers, Cutters Point Coffee and more and should provide a great location for roller derby fans.

“We are still a military league and we still affiliate with JBLM,” the announcement on their Facebook page read, “however we needed the space to grow and be more accessible to our non-military fans who may have a hard time getting on base for bouts.”

The first event scheduled for the Bettie Bunker is a New Years Day Fundraiser Poker Tournament beginning at 1:00 PM.

Also moving into the facility will be the M.I.A. Derby Girls. M.I.A. has played their home bouts at the South Sound Sports Center in Tumwater until this season and will now share the Bettie Bunker with JBLM.

The first bout scheduled for the Bettie Bunker in Lacey is on January 18th between facility mates M.I.A. and the Bettie Brigade. For more info, click here.

With the addition of the Bettie Brigade, the Olympia area is now home to four roller derby organizations: the Oly Rollers, Underground Derby, JBLM and M.I.A. Welcome to Derby City USA.