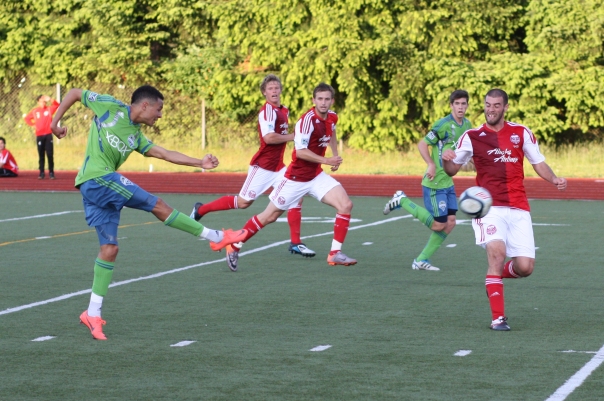 The Sounders U-23s and Portland Timbers U-23s meet on Sunday at Tumwater Stadium at 2:00 PM in the junior version of the Cascadia Cup. Yesterday we took a look at the PDL Northwest Division leading Timbers, today we preview the Sounders, 1-o winners of last year’s version in the South Sound…

The Sounders U-23s come into the Tumwater game just three points behind the Timbers U-23s for first place. The Sounders have 10 points at 3-2-1 and are coming off of a 1-0 win over the North Sound Seawolves on Wednesday night in Sumner. Blake Wise scored the game’s only goal midway through the second half. It was the San Diego State senior’s second goal of the season. In the 2012 season for the Aztecs, Wise tallied four goals with five assists in 18 games.

Wise shares the scoring lead for the Sounders with San Diego State alum Miles Byass and University of Akron senior Aodhan Quinn. Wise spent 2011 with the Timbers U-23s before spending 2012 with Orange County Blue Star. Meanwhile, Quinn is in his second season with the Sounders after scoring four goals with three assists for Akron in his junior year. Quinn led the 2012 Sounders with six goals and three assists.

Zac Lubin as a Saint

Three local players are getting minutes for the Sounders this season. Saint Martin’s alum Zac Lubin has made two starts in the PDL season allowing three goals to his former squad, the Kitsap Pumas, in a 3-3 draw on May 24th at Curtis High School and earning the shutout with three saves against North Sound on Wednesday. He also made two starts in the US Open Cup getting the win over Doxa Italia before dropping a 3-0 decision to the USL Pro’s Charlotte Eagles. Lubin spent 2012 with the Pumas making 15 starts posting a 1.034 goals against average.

Capital High School grad and Gonzaga senior defender Josh Phillips has made three appearances and though not credited with an assist, Phillips played a ball in from the corner to Wise who scored a bicycle kick goal in stoppage time to knock off the Washington Crossfire 1-o.

Yelm’s Miguel Gonzalez has made one appearance, playing 17 minutes as a sub against Kitsap. The senior at Seattle University scored four goals with an assist in his junior season with the Redhawks.

Luis Estevez rounds out the goal scoring this season for the Sounders. The native of Rotorua, New Zealand is heading into his sophomore season at the University of Mobile.

Veteran defender Steve Mohn has added two assists in six games and has teamed with fellow University of Washington Husky Chris Brundage and Puyallup’s Mark Lee on the back line.

The Sounders U-23s are coming off of a PDL semifinals run in 2012. The Sounders came into last season’s game in Tumwater with a 2-1-3 record. Including their 1-o win over Portland, the Sounders went 9-1 to finish out the regular season finishing in first place of the Northwest Division. They then beat the Washington Crossfire, FC Tucson and the Ventura County Fusion in the playoffs before falling to Forest City London, the PDL’s eventual champion, in the semifinals.

DeAndre Yedlin in Tumwater with the Sounders U-23s in 2012

Four players from last season’s squad signed professional contracts this season. DeAndre Yedlin has played in 11 MLS games for the Seattle Sounders, Anthony Arena has appeared once for the Houston Dynamo, Doug Herrick signed with the MLS pool but has yet to be signed to a team and Jamael Cox, who scored the game winner in last year’s game in Tumwater, signed with the Tampa Bay Rowdies.

The two teams have met once already this season with Portland taking a 2-o win in the season opener in Portland. They will also meet in Beaverton in the season finale on July 16th.

Tickets for the Sounders U-23s and Portland Timbers U23s on Sunday afternoon at Tumwater Stadium are just $10 and will be available at the gate. First kick is scheduled for 2:00 PM.